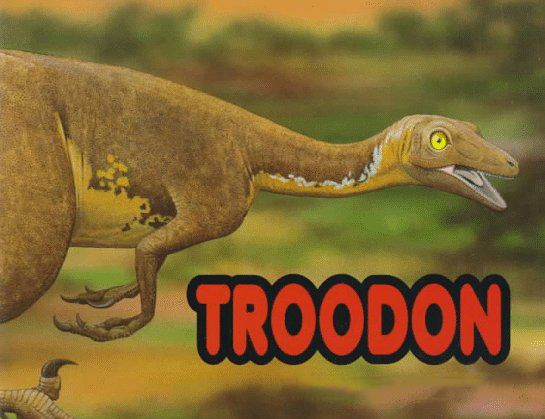 TROODON – The True Adventures of the Smartest Dinosaur

Note: Each event and behavior described here has happened to a dinosaur.

CHAPTER 1: IN THE BEGINNING

Once upon a time, there was no Troo.

In the cool twilight, the large-eyed Troodons could see what larger dinosaurs could not. The way through the dense forest of conifers was clear to them.

They walked as quietly as if hunting. The pine needles scratching their toes. They took in the fresh scent of the woods.

There were four in all. A mother, her belly swollen with eggs. A father, slighter than the female, his brilliant red feathers muted by the dimming light. Two squabbling yearlings, both males, followed. They were tiny – scarcely two feet high, yet already half the height of their parents.

The wind gusted through the trees. The mother raised her head, sniffed, and headed off toward the last light of the setting sun. All followed.

The forest gave way to a carpet of ground-cover and ferns. The ground was now soft and wet, giving way beneath their feet.

The mother pressed on more urgently, determined to reach their destination before nightfall.

They soon crossed a small rivulet. Now they were headed up a sharp and rocky incline. In the distance, they could hear an unfamiliar rumble. A great rumble fashioned from a hundred rumbles it seemed. By the time they had crested the hill, the sun was down and a full moon on the rise. The ground vibrated beneath them from the now-deafening base growl.

The mother peered over the far edge of the ridge, soon joined by her family. Below, in the pale white light was a sight, not just a sound, the likes of which the young had never seen nor could have imagined.

On a flat plain, mounds of mud stretched to the horizon spaced neatly, evenly some 30 feet apart. Beside each mound crouched one, sometimes two, duckbills.

The placid giants stood guard over the mud-rimmed shallow holes. In each nest, at least those visible in near sight, two dozen spherical eggs spiraled across the basin.

The duckbills nuzzled the eggs, looking up frequently, anxiously to spot threats to their young. And boomed their bass cries ceaselessly, trumpeting from their opened mouths.

The Troodons had arrived. Mother Troodon had found her baby-sitters.

NEXT: Chapter 2: The Nest Trick